First off, we just wanted to wish everyone a Happy New Year this week, and hope everyone has been enjoying the holidays. Keep us in mind if you need anything, we'll only be closed on Friday of this week for New Years Day. Got a resolution to get better at the guitar you just got, or want to learn to do something with that guitar you've had in the closet for 20 years? We can help, just get in contact (call/text, Facebook, email, etc.)

2015 has been a huge year for us, as a lot of you know. We can easily attest that to our relocation in April to The Thought Lot in Shippensburg - it was easily the best decision we ever made as a business, and we want to thank everyone again for their patience in the move, and Thought Lot management for giving us the opportunity to be a part of what they do. And we're going to be barreling into 2016 just as strong with a near immediate expansion.

We have now been approved to offer financing on Reverb. Here's how it works.

Provide some basic information and get instantly approved to split your purchase into 3, 6, or 12 monthly payments. (Rates from 10-30% APR)

Returns accepted within 7 days of receiving item.
Untouched, unopened items may be returned within 7 days of the date of delivery for a full refund. Buyer assumes responsibility for all return shipping costs, unless return is a result of incorrect shipment or item is not as described. The seller reserves the right to refuse any return if item is not in new, untouched, or unopened condition.

Vintage & used items may be returned within 3 days from the date of delivery for a full refund. Buyer assumes responsibility for all return shipping costs, unless return is a result of incorrect shipment or the item is not as described.

Affirm is only available to United States residents 18 years or older. Shipping and billing addresses must be located within the US.

Affirm financing is only available on items over $150 at this time.

Affirm FAQ can be found at this link.

This particular item is on consignment with a lot of room to move. Get a high quality digital piano with all the bells and whistles for well under new cost. 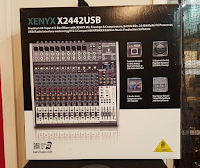 This mixer was lightly used but incredibly well taken care of. This price also includes a gig-bag style case and gooseneck light. Tested for recording purposes to great effect

HOWEVER: if you are looking to purchase an interface mixer with the intent of running individual channels out via USB simultaneously, this is not for you. The signal reaching the computer will be identical to the main mix.
Read more here >>>

Doors open at 6pm, music starts at 7pm. $10 cover ($8 in advance,https://www.eventbrite.com/e/the-honey-dewdrops-feat-matt-miskie-and-tyler-michael-law-thethoughtlot-tickets-18893682513 ). BYOB for 21+ (with valid ID). All ages, 17 and under with an adult. There will be food available for purchase from Toasties Sustainable Table.

About The Honey Dewdrops:

"...songwriting that strives to honor the simplicity of it's forebears."- UTNE MONTHLY READER

"Their talent is such that it's quite possible that a new band recording in the year 2020 might cite the Honey Dewdrops as a prime influence."- BLUEGRASS UNLIMITED MAGAZINE

“The Dewdrops have something unique and oftimes mesmerizing recommending them in their plaintive
harmonies, easygoing rhythms, evocative arrangements, well-crafted original songs, and a genuine
approach...” — DAVID MCGEE, THE BLUEGRASS SPECIAL

Performance credits included support concerts for Tom Rush, Tom Chapin, Dave Mason, and others. He tours extensively throughout his home state of Pennsylvania, and has been a featured performer at venues and events from North Carolina to Wisconsin.

Tyler is modern folk and Americana musician with roots in blues, country and protest music. Tyler's songs are a combination of character based story-telling and personal experience drawing on inspiration by acts such as, Shovels and Rope, Bruce Springsteen, Bob Dylan, Johnny Cash and The Civil Wars.

Every year we get a staggering number of people wondering what to get their musically inclined friends and family members. Here's a few ideas that we can help with.

This year, we were lucky enough to acquire (via consignment) quite a few items that we can sell as a starter kit during the holiday season. We're featuring a bunch of full size strat style guitars (varying brands) that will work very well for a beginning guitar player, be it someone who hasn't even picked up an instrument, to someone that's been learning on an acoustic and would like to explore the possibilities an electric holds. We have put together a starter kit with a solid body Behringer electric guitar, gig bag, upright stand, cable, V-amp guitar amp, strap and picks for $174.99. You could buy all of these items separately for over $200 online, and still have to pay shipping on each. The guitar and amp themselves are either lightly used or like new and well-tested to make sure that the items are good to go on Christmas Day.

We have tickets available for the Honey Dewdrops show THIS Friday, with special guests Matt Miskie and Tyler Michael Law - stop by today and get your tickets.

Laura Wortman and Kagey Parrish share more than most couples. As the Honey Dewdrops, they share stages from performance venues to festivals across North America, stretches of rolling, infinite roadway, and a lot of songs; they share one mic and a hunger to pay attention to what endures.

The thirst to explore and document is evident in their growing catalog of releases including "Silver Lining" (2012), a Top Ten record on national Folk and Americana stations. Other releases to date are "Live From Folk Alley at Fayetteville Roots Festival" (2013), "These Old Roots" (2010) and "If the Sun Will Shine" (2009).

With tight harmonies and a musical ensemble that includes clawhammer banjo, mandolin, and guitars, the effect is to leave listeners with only what matters: the heart of the song and clarity over ornamentation. After spending the better part of 2013 and 2014 living on the road, Laura and Kagey now call Baltimore, MD their home and it's where they wrote and recorded their fourth full-length album, "Tangled Country" (May 2015). The set of songs is raw and engaging with characters and images from kindred people and places. And like their stage performance, these new songs rock and reel, and then they console you when you come back down.

The Guitar of Blind Blake

Blind Blake was the premier ragtime blues guitarist of the 1920s. He extended the alternating bass style, that was popular at the turn of the century, to encompass the dance trends and more complex blues ideas that were emerging from the jazz bands of New Orleans and Chicago. His playing featured unique right hand thumb rolls that evoked the feel of the Charleston dance-step. Rev. Gary Davis greatly admired Blake's playing and used to remark that Blake had a "sportin' right-hand". Blind Blake influenced generations of country blues guitarists and was never equalled. Read More Here....

Join us Friday, December 4th for a night of cool, alternative rock featuring Ohio band Ottawa and Lancaster band Magnolia. Doors open at 6pm, music starts at 7pm. $10 cover at the door ($8 in advance, http://bit.ly/1JJVqJl ). All ages welcome, BYOB for 21+ (with a valid ID). There will be food available for purchase from Toasties Sustainbale Table.

About Ottawa:
Through high school friendships, two Craig's List ads (Musicians Wanted, not Missed Connections), and a few years of trial and error, OTTAWA was born on Cleveland's west side in the winter of 2014.

Since then, lead singer Dale DeLong, guitarists Will Hooper and Tim Czajka, drummer Steve Crobar and bassist Chris Williams have developed a sound described by Cleveland Plain Dealer reporter Troy Smith as "a brand of garage pop that merges elements of indie-rock, blues and new wave that's quite melodic and hypnotizing."

That unique sound is a result of the band's diverse influences, including The Killers, Oasis, Fleetwood Mac, The Velvet Underground, and even 90s pop groups. 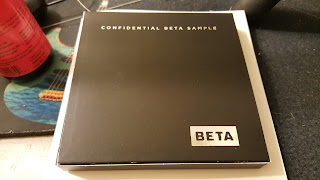 D'addario has done it again.

Some time after their NYXL Electric beta and subsequent release (which by the way is still expanding - we just got word of 3-pack sets of their most popular options being released), D'addario has been hard at work on the NYXL acoustic counterpart, and we've been given the opportunity, again, to take part in the beta test.

Now, to be clear, this counterpart has no direct relation to current D'addario acoustic offerings, other than, on the set we received, an indicator that it is the gauge equivalent of the EJ16 Light Gauge. One might argue that the newer EXP variant, with its usage of NY Steel, might be the acoustic counterpart, and up until this beta test, one might also be correct to say so. Not anymore. 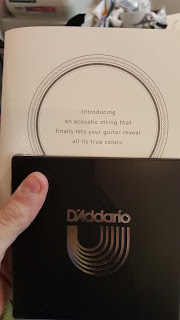 Similar to the NYXL beta test, we received the set in a black "Confidential Beta" string pack. Also included in the package was an insert detailing the goals of the string set, as well as what made these strings different on a technical level, incorporating phosphor bronze, nickel, and NY steel in this new formula. These strings were designed with your tonewoods in mind so they'll go hand in hand with the richest tonewoods. My particular Breedlove has rosewood back (solid) and sides (laminate), and rosewood is a very rich sounding wood on its own, one of the reasons I fell in love with the instrument as it is. So when a string is designed to let the tonewood shine, instead of masking it, I'm all for it conceptually.

Opening up the black Beta pack, revealed the standard gray sealed protection that anyone that uses D'addario strings regularly will recognize, with the printed indication noted above. I found this immediately interesting, because with the specification EJ16, and knowing that this is a popular Phosphor Bronze set, I wondered that if, in the future we might be seeing a different alloy in the same series, featuring components closer to the composition of 80/20 bronze, creating an equivalent to, in this case, the EJ11. I'm no chemist, though, and strictly speaking, I don't know exactly how an alteration of the alloy in that way may respond, so I could just be unrealistically speculating.

Come out for some live music!

You may have heard The Thought Lot is closing and slated for demolition. This is true. As of March 17, we have received our formal notice ...